The Verdict – State Vs Nanavati Is Ruled In Favour Of Binge Watching! Read Reviews Inside 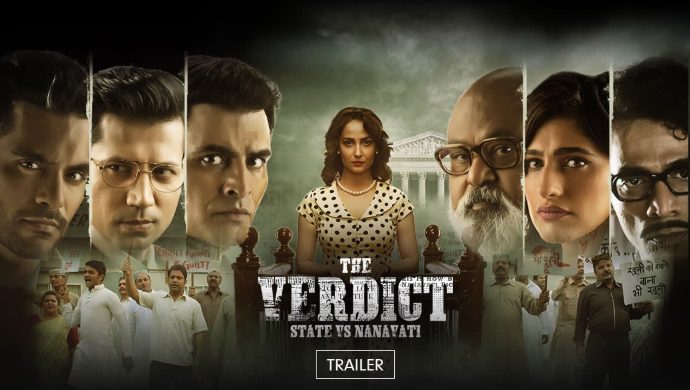 ZEE5 and Alt Balaji’s The Verdict – State Vs Nanavati released on 30th September. And a week later the reviews and reactions keep pouring in. The strong cast includes Manav Kaul, Elli AvrRam, Kubbra Sait, Sumeet Vyas, Saurabh Shukla and Makarand Deshpande only to name a few. Watch some of the celebrity reactions to the show here.

Latestly.com described the show as ‘a captivating courtroom drama, aided and abetted by its production values and engaging performances from its cast.’ It singled out 2 actors for their roles saying, ‘Sumeet Vyas and Makrand Deshpande are the charm of the show and they just raised the bar every time they are on screen. They also provide some of the best humour in the series.’ The Telegraph also seconded this opinion saying Sumeet Vyas and Makrand Deshpande were ‘a delight to watch’.

If you’re confused that ‘The Verdict’ and ‘Rustom‘ are too similar the Telegraph said that ‘Rustom, was loosely based on this case, but the upcoming show presents the facts and keeps the names intact.’ Spotboye elaborated on this point saying ‘You’ve seen versions of this story before, but never as raw and unfiltered as this.’

Another aspect of the show much appreciated was the productions value. Spotboye commented on this saying ‘you are taken back into the world of 50s Bombay, with meticulously designed sets and the creation of a world that is now long gone.’ Even Mid-day who didn’t thinks much about the show said ‘The upside is that the makers have beautifully recreated Bombay of the late ’50s, complete with vintage cars, bouffant hairstyles and dresses’.

In other celebrity reactions of the show, Akshay Oberoi who was seen in movies like Kalakaandi and Fitoor, had this to say about the show.

Started watching #Verdict on @altbalaji … a brilliant legal drama after a while …. congratulations @samarmumbaikhan @ektaravikapoor @altbalaji

Shreyas Talpade complemented the director of The Verdict, Samar Khan.

This is got hooked! Mind blown by this one..Super awesome @samarmumbaikhan it's a great watch. #Verdict @ektaravikapoor @altbalaji

Amit Sadh who was recently seen in another ZEE5 Original Barot House, on ZEE5 itself.

Maduhriuma Tuli who also was seen in Kumkum Bhagya, also loved the show and the positive reviews it received.

One review we are still awaiting is Tisca Chopra’s who is excited to watch the show.

Hearing lovely things about #Verdict! On my watch list for the weekend, congratulations @ektaravikapoor @samarmumbaikhan, @KubbraSait @Manavkaul19 @Imangadbedi & all teams.. Looking muchly forward to watching this one

Have you watched The Verdict yet, let us you what you think about it in the comments below. Here’s what Elli AvrRam thinks about the show and her role in it.

Read more about Elli AvrRam preparing for her role here.