Kumkum Bhagya recently telecast a Holi episode with the new generation, Prachi and Ranbir and here are some behind-the-scenes images. 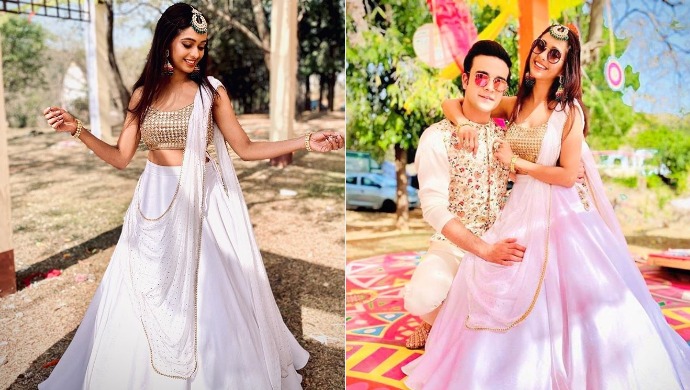 Kumkum Bhagya has reached an exciting turn with Ranbir being forced to marry Maya. Prachi and Rhea continue to be at loggerheads while Ranbir is in trouble. This track of Kumkum Bhagya has interested the viewers as the TRP rates have reached a new high. However, we believe that whatever comes next in the show will be far more intriguing. Well, both Rhea and Prachi’s love story hangs by a thread as Ranbir might get together with either of them once the Maya fiasco comes to an end. While we do have something to look forward to on the show, there’s something more exhilarating that is set to happen over the weekend.

There will be a Holi episode to take place with Kumkum Bhagya and Kundali Bhagya. We don’t know for sure exactly what the makers plan to do on the shows but we sure know that it is going to be super awesome as the behind-the-scenes pictures are out! Prachi and Ranbir, played by Mugdha Chapekar and Krishna Kaul, are having quite a ball shooting the Holi episode. You can see all the fun in the pictures below!

The Holi ensemble chosen by Mugdha Chapekar for the upcoming Holi episode is quite ideal! In this behind-the-scenes picture, Mugdha looks lovely in a white lehenga with an embellished blouse. The actress has completed the look with big jewellery which you can see in the picture.

Mugdha And Krishna Kaul In A Sweet Embrace

Krishna and Mugdha look adorable as they have matched their ethnic ensembles for the Holi episode. Both of them have also donned sunglasses to compliment each other’s looks. Don’t they make you go ‘aww’?

After a rather adorable click, Krishna and Mugdha up their ‘cool’ game with this picture. We are loving their swag!

Another look from the BTS Holi episode

We are super excited to see the upcoming Holi episode. Why won’t we be? These pictures prove that the episode is going to be very entertaining.

13 Underrated Movies On ZEE5 That You Haven’t Seen, But Should!

Why Gold Tamba From Batti Gul Meter Chalu Is A Song You NEED To Watch!

Watch It Happened In Calcutta, Now Streaming On ZEE5