"ZEE5 promises high-quality content to keep our viewers across hooked to the platform for the entire month," Aparna Acharekar, Programming Head, ZEE5. 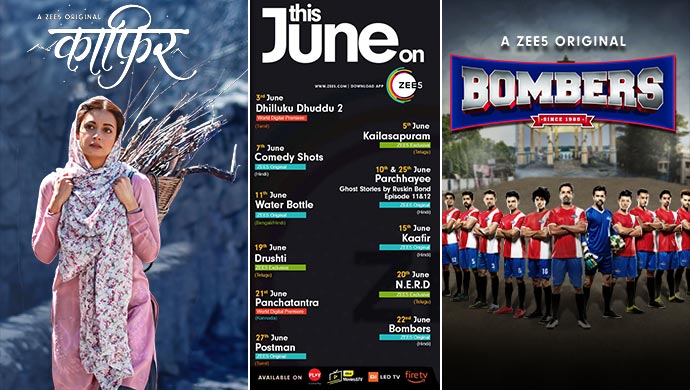 Being the fastest growing OTT platform in India, ZEE5 is all set to entertain the viewers with its exclusive content line-up across languages and genres. This includes some most-awaited shows and web-series like new episodes of Parchhayee-Ghost stories by Ruskin Bond, Kaafir starring the Bollywood actress Dia Mirza and Bombers, the story of a football team from Chandan Nagar.

Take a look at the trailer of Kaafir below:

ZEE5 will also be hosting the very first stand-up comedy show Comedy Shots. This show will be touching upon the most loved topic in the country i.e. cricket and politics. With comedians like Rahul Dua, Sumit Anand, Aadar Malik, Gaurav Kapoor, Anubhav Singh Bassi and others, get ready for the laughter riot from 7th June 2019.

Another interesting story is Kaafir which is inspired by a true story of a Pakistani girl who comes to India under a strange series of circumstances and is unable to go back. With actors like Mohit Raina and Dia Mirza, this will be an interesting web-series starting from 15th June 2019.

Are you a football enthusiast? If yes then you will totally relate to the upcoming web-series Bombers. With the star cast like Varun Mitra, Meiyang Chang, Ranvir Shorey, Aahana Kumra, Prince Narula, Sapna Pabbi, Zakir Hussain and Anup Soni this series is a grand multi-starrer sports drama that will start from 22nd June. Keeping in mind the current trend of crime-thrillers, ZEE5 comes up with its original Bangla series, Water Bottle streaming from 11th June. Directed by Tathagata Mukherjee, this psychological crime drama narrates the story of a serial killer.

World Digital Premieres that you absolutely must watch out for is the Tamil film Dhilluku Dhuddu 2 that just released on 3rd June 2019, on ZEE5. It is a horror-comedy film starring Santhanam, Shritha Sivadas, Rajendran and Urvashi. An interesting love story which focuses on a common man and his tryst to eliminate a paranormal entity who keeps shadowing the woman he loves. Tamil fans will also enjoy the release of Postman, the story of a man who was in a coma for 20 years. After waking up from the vegetative state he is now on a mission to deliver all the letters that he couldn’t.

There is a lot of buzz for the premiere of the Kannada film Panchatantra, starring Vihan Gowda, Akshaya Gowda and Sonal Monteiro. The film is directed by Namma Bhatre (Yogaraj Bhat) and is said to be based on cars, so it will be thrilling to see some action on-screen, don’t you think?

To keep you entertained further, there will be some interesting ZEE5 Exclusives coming up your way to. Starting with the ZEE5 Telugu Original Series Kailasapuram, that is slated to release two days from now, i.e, on 5th June 2019. Other Originals include Drushti and N.E.R.D, also in Telugu, slated to release on your ZEE5 on 19th and 20th June 2019, respectively.

We feel like Santa has come early this year as ZEE5 has something for everyone. We would also like to remind you that two new shows will be introduced on ZEE TV and And TV respectively. One is a love story of Badal and Suman in the And TV show Jaat Na Pucho Prem Ki and the other is Humari Bahu Silk which is based on unwanted societal norms set for women in our country.

Lets us know which show, movie or web-series are you excited about the most?

Did you miss the season finale of Karenjit Kaur: The Untold Story of Sunny Leone. Watch it now!

Get ready to cheer for the Bombers, Chandan Nagar’s popular football team In Bombers a ZEE5 Original