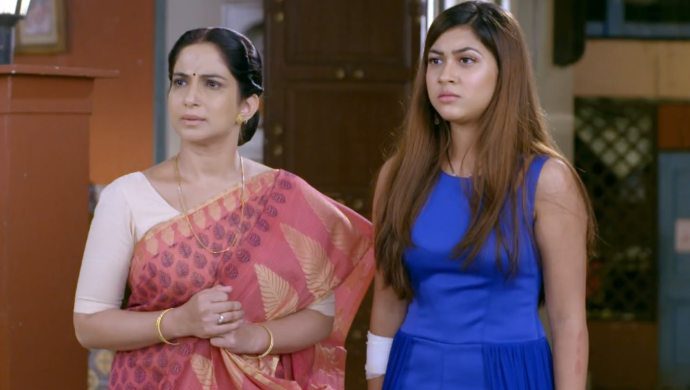 In the latest episodes of Tujhse Hai Raabta, Janmashtami celebrations are its peak in Ahilya Niwas. Malhar stays by Kalyani’s side which makes it impossible for her to get up and keep an eye on Ketki. Thus, Anupriya enters Ketki’s room and records her conversation with the terrorists. Ketki, who is suspicious of Kalyani, decides to expose her by troubling Moksh in front of her. Unable to resist herself, Kalyani gets up from her bed and admits in front of Ketki that she was pretending to be unconscious to stop Ketki and Sarthak’s marriage. Malhar overhears Kalyani confessing to her drama and gets furious.

Tonight on Tujhse Hai Raabta, Kalyani shall show the video Anupriya had taken on her phone to Malhar. Mai had recorded Ketki’s conversation with her gang members previously. Malhar is shocked and taken aback. He is shown approaching Ketki, who seems rather scared and taken aback by Kalyani’s move.

Will Malhar finally come to know of his childhood best friend Ketki’s real motive? Will Ketki’s true face be exposed or will she cover up again?

Watch Tujhse Hai Raabta at 8:30 pm on ZEE5 from Monday-Friday to find out!

Highly Opinionated: Why We Need More Real And Relevant High-School Dramas Like REJCTX

Jamai 2.0 Trailer: Ravi Dubey And Nia Sharma's Show Has Blockbuster Written All Over It