In tonight's Maha Episode, Kalyani and Anupriya set out to save Moksh from Sampada while Malhar follows Atharv to look for Mugdha. 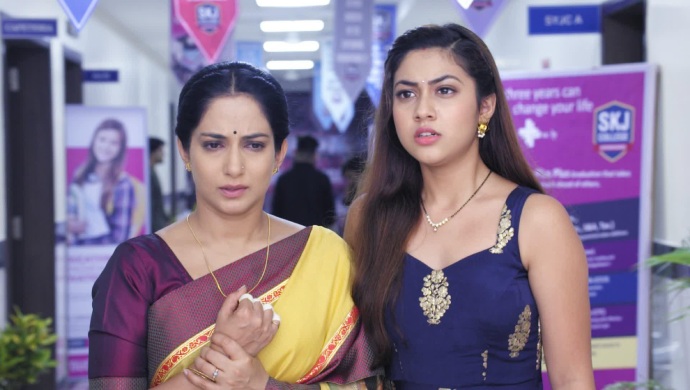 In the previous episode of Tujhse Hai Raabta, Kalyani is about to take her exams. She finds out that Anupriya’s hand is injured and she will not be able to write anything. Kalyani submits her paper and helps Anupriya with her exam. Atharv sees Kalyani writing Anupriya’s exam and complains to Malhar. They check Kalyani’s paper and find out that she hasn’t written enough to even pass the exam. Malhar and Anupriya both scold Kalyani. When she leaves the exam centre, Kalyani finds a beggar holding her baby, Moksh in her hands.

In tonight’s Maha Episode, Kalyani goes to tell Malhar about Moksh at the police station. However, a havaldar tells Kalyani that Malhar doesn’t want to see her. Kalyani stages a protest to make Malhar come out and meet her. Malhar tells his constables to get rid of Kalyani. He gets a call from one of his men informing him about Atharv’s whereabouts.

Sampada is waiting in the hospital with Pillu. She tells the watchman who is on her side to call up the couple. They were supposed to take Moksh away to Dubai. However, the watchman tells Sampada that the couple are not answering the call. Malhar leaves from the back door to track Atharv and find Mugdha.

Kalyani finds out that Anupriya is planning to take her name out of the college students’ list. When Anupriya doesn’t listen to Kalyani, she decides to stand in front of a charging bull. Anupriya shows up and saves Kalyani from the bull. Kalyani convinces Anupriya to not drop out of college or she will do other things to put herself in danger.

Kalyani asks for Anupriya’s help in looking for Moksh. She finds out that Sampada is replacing the poor woman’s kid with Moksh to take him away from the family. Kalyani says that to find the real Moksh, she will use the police dog, Durga Prasad’s help by giving him Moksh’s clothes to smell and follow the trail.

Sampada’s couple shows up to take Moksh away. She gives them money and plane tickets for Dubai. While she is taking Moksh to the lift, she finds Malhar with his men checking the floor. Sampada asks the watchman to take Moksh by the lift. Kalyani loses Durga Prasad and finds him near the lift.

Atharv panics on hearing that Malhar has come to find Moksh. Sampada also finds Moksh alone in the same room as Mugdha. She sees Atharv there and is surprised. Sampada is in the lift with Moksh. But Atharv asks him men to cut the lift wires to stop Malhar and his men.

Sampada and Moksh are stuck inside the lift after the wires are cut. Sampada faints as Kalyani finds Moksh in the lift crying. She tries to break open the lift doors. Malhar finds out that the lift is stuck. Will Kalyani and Malhar be able to save their child? Stay tuned to find out.

Sriti Jha's Recent Trip To Berlin Was A 'Bunch Of Picnics And Parties!' See Pics

5 Romantic Recipes To Relish With The Pitter-Patter Of Raindrops