Rohan Ghosh, director of Kaali 2, joins Vidya Malavade and share a message that people can take back from the series about Gender Equality #SheIsEqual 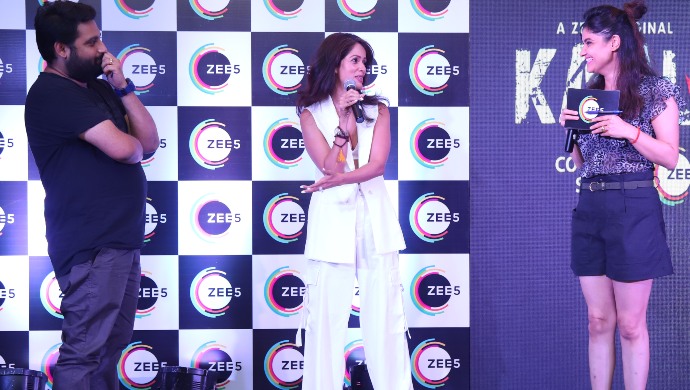 Kaali the dark and gripping story of a mother who is forced to sell drugs to pay hospital fees and save her son from dying. The soon to release second season of this show will see Paoli Dam reprise her role as Kaali. This time the story is set to get bigger with Vidya Malavade playing the role of a cop trying to catch Kaali. This season is set to release in both Hindi as well as Bangla. We spoke to the director Rohan Ghosh and actress Vidya Malavade about the message people can take back from the second season of Kaali which has two female protagonists.

Watch the teaser for Kaali 2 here.

Kaali 2 is set to release on 27th March. However, one half of the director duo Rohan Ghosh reveals that he wished the series was ready for release on Women’s Day. He tells us his aim with this series “Nothing happens in our lives without women. All our lives have been impacted by women be it our mothers, grandmothers, sisters, wives or girlfriends. We have only seen the women through the impact they have on our lives. We don’t see the struggles they go through themselves. Kaali is the story of all women but not every woman is Kaali. My only wish for Kaali is that if people watch this show and no one applauds it or appreciates it. Even if one woman watches the show and gets the courage to face her own battles then I will be happy with the work. So Kaali is one story most women will relate to and men must learn from.”

Vidya Malavade feels  women should be celebrated everyday. “I think the director rightly said, women deserve to be in every field. I think all of us are pushed to our limits, a mother, a daughter, a career woman, a cop and a woman on the wrong side of the law. Everyone is pushed to their limits by society. We are objectified, we are supposed to behave a certain way which we are never told why. I think we should let women be because we are naturally beautiful. I always say that if you watch a train pass by the men’s compartment is always black, white or grey. If you watch a women’s compartment it is full of colour. Women make life better so Happy Women’s Day.”

Rohan Ghosh also tells us how he feels about the twitter trend #SheIsEqual for Women’s Day. “It’s shameful that in today’s age women are still having to fight for equality. Even at home men should be respectful towards their wives at all times and especially in front of their kids and I won’t even get into the physical abuse part of this because that is disgusting. I think men need to just let women by because they can figure their way out. I think men find it hard to play second fiddle. Men need to be able to shift their careers because their wives found a better opportunity somewhere, because they would expect their wives to do the same thing for them. I feel the fight for equality for women ironically rests in men’s hands. Because the inequality is in their minds. Women are doing wonderfully and men need to learn to step aside for them.”

Watch the story so far in this recap of the first season of Kaali, streaming now on ZEE5.

Take Inspiration From Pragya, Preeta, Guddan To Look Like A Vision In White On Holi!