Never Kiss Your Best Friend is a web series adapted from Sumrit's novel of the same name. It stars Nakuul Mehta and Anya Singh. 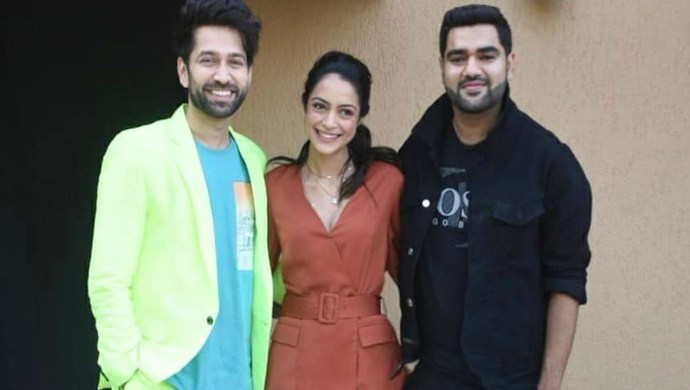 “My baby is going to college finally!,” exclaims an excited Sumrit Shahi on his recent release of the web adaptation of his novel Never Kiss Your Best Friend. Starring Nakuul Mehta and Anya Singh in the lead roles, the ZEE5 Original web series released on 20 January 2020. “I am very happy. Watching the series of my book’s web adaptation I had the most paternal feeling. This baby is special,” he adds. In an exclusive conversation, Sumrit reveals it all about the digital drama, Nakuul-Anya’s casting, his characters Sumer – Tanie and more.

How apt do you think is the casting of Nakuul Mehta and Anya Singh?

I will be very honest, and trust me I am the kind of person who is politically very incorrect. Specifically for Tanie because it is a very tricky character to play. She is not your conventional girl. She has a mind of her own. She is opinionated. I wanted an actor who could carry the subtlety in place without sounding brash. The humour of the series is also very real, it’s not OTT. So, it was important to have actors who’d play the parts well. I am very happy with the casting of Nakuul and Anya.

Watch the trailer of Never Kiss Your Best Friend here:

Have you watched any of their past works?

I have seen his film. I have seen a couple of episodes of Ishqbaaz, and that is what surprised me. Because I have seen him as this angry, young man but when I met him at the production house’s office, I knew he is a good actor. He is very relaxed and chill as a person. I think if you take away the silliness of Sumer, because Sumer is a man child, at the core of it Nakuul and Sumer are both likable human beings. Both are warm, polite, kind people. So that worked for me. Nakuul was a revelation. I knew him as Shivaay Singh Oberoi.

Sumer is a self-aware man child. He has an endearing silliness. He is not daft.

How did the idea of writing Never Kiss Your Best Friend come about?

It is the sequel to my first book. First work is always very autobiographical. Not the characters but a lot of instances and equations were real. I also consciously tried to go back to my own stories, my friends’ stories. I wanted to write an extremely relatable book. The idea was it. There are only two types of stories: character driven and plot driven. I wanted this to be a character driven story of two people navigating emotions and their feelings for each other. It’s real but conveniently real.

Did you have to make any changes while writing the screenplay?

Only cosmetic. A lot of things in the book are in the character’s head. The written word may not visually translate to the same action. But the emotion hasn’t changed, majorly the essence of it hasn’t changed. The geography probably has changed a little for the better. I was on shoot the entire time. I was telling them to push the envelope. While writing the screenplay of the book, I found five things I should have added in the novel. Those will stay with me as a writer.

Will we get to see those five things in your next novel?

The problem areas I will definitely improve. My characters are more woke now. They are more sensitive towards say the LGBTQIA community. One thing I made sure in my book is that they have to be respectable towards women. Sumer may be shagging in front of Tanie but he is not a pervert. Little things I realized but that’s also evolution of life.

I am sure there would have been offers to make a web adaptation before. Why ZEE5?

What worked for me was I have worked with Tarun Katial Sir earlier. The singular thing I love about him is he is very clear with his vision. I also realized, ZEE5 as a platform respects writers a lot, they are making a lot of book adaptations and that reinforces your belief in the system.

Do you think the web as a medium empowers the writers?

Web does give writers the liberty because television is mass consumption medium. It is empowering because you get to say the story as you want to. People also watch it without judgement. It is a very personal choice-driven medium. It also promotes a very healthy competition amongst all mediums. Content has generally improved. So, I am all for it. But I am not all for the fact that just because there is no supervision, write anything. Good looking people and abusive words don’t make for stories.

The OTT content in India is leaning heavily on the dark side. Is a saturation point around the corner?

I think one of the reasons why people are looking forward to Never Kiss Your Best Friend is because a light-hearted, nice series starring two uncomplicated characters with complicated feelings is coming after a while. I think the saturation point is already setting in. It is the problem with any mass media, if one thing works people try to ape it.

You will get to see the characters in skin and flesh. It is as true to the novel as it can stay. There is more to the characters than in the novel. It is Sumer and Tanie 2.0.

Lastly, will we see you make a guest appearance in the series?

I was supposed to make a cameo but I couldn’t shoot because I fell sick.

Rituraj Singh Talks About ‘Never Kiss Your Best Friend’ and His…

Watch ‘The Verdict – State Vs Nanavati‘, also streaming on ZEE5.

Who's Your Daddy Review: A Dramedy That Will Keep You Guessing And Titillated