ZEE5 Original and ALTBalaji Original Gandii Baat and Virgin Bhaskar too are set to premiere on the OTT platform next month. 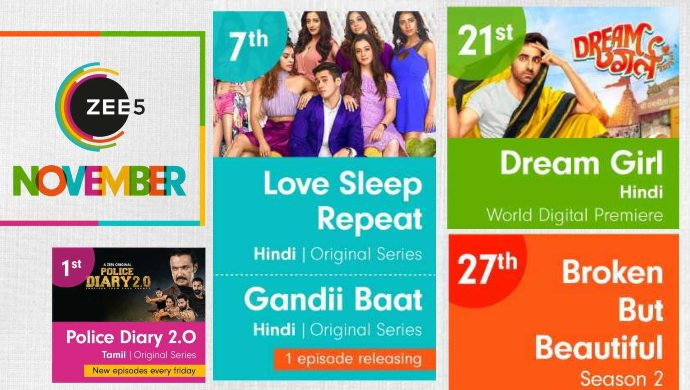 Entertainment is what you looking for? Head straight to ZEE5 for a mixed collection of super-duper hit films, binge-worthy web series and favourite television shows. The OTT platform boasts of blockbuster movies like National Award-winning film Uri: The Surgical Strike, Judgementall Hai Kya, Jabariya Jodi, and several others. Notably, the video streaming service is set to host the digital premiere of Ayushmann Khurrana and Nushrat Bharucha-starrer film Dream Girl. No kidding, one of the best Ayushmann films will soon be a click away from 13 November 2019 onwards.

Directed by Raaj Shaandilyaa and co-produced by Balaji Motion Pictures, Dream Girl stars Ayushmann as a cross-gender actor whose female voice impersonation begets attention from others. As of 6 October 2019, with a gross of ₹166.77 crore in India and ₹31.44 crore overseas, the film has grossed ₹198.21 crore worldwide. “DREAM GIRL is a laugh-a-minute-riot that fulfills all the expectations,” wrote BollywoodHungama in its review of the film.

An episode of ZEE5 Original and ALTBalaji Original Gandii Batt shall premier on the platform on 7 November too. Meanwhile, Virgin Bhaskar shall be available from 19 November 2019 onwards.

Fans of Broken But Beautiful, here’s a good news for you! Second season of Vikrant Massey and Harleen Sethi’s romantic web series, titled Broken 2, is coming soon! You can start watching the episodes from 27 November 2019. We bet this piece of information made you happy, did it? Let us know in the comments box below.

#broken2! Wat happens when the heart heals after being broken ..when u get ur breathe back …do easily love again or do u develop a weird instinctive reflex to recoil from attachment????? After being broken do ppl move on or do they carry BAGGAGE! Again from my heart to urs …:crushed broken healed and with baggage 💖💖💖💖 With d stellar team I love @saritatanwar @reshunath With d same fab cast @itsharleensethi n @vikrantmassey87 ! A special mention to this special boy whose expressions can melt any soul ! Would not do broken 2 without @vikrantmassey87

In between the Hindi releases, don’t forget to watch Police Diary 2.0, ZEE5 Tamil action thriller Original series that is based on true events. Starring Vincent Asokan, Santosh Prathap, Anjana Jayaprakash, and Balaji Mohan, this action-packed series will witness 2 special task force teams who are on a job to identify and probe into the heinous crimes that have crippled the state of Tamil Nadu

Bengali viewers have a reason to rejoice as the platform is set to release two original series –Lal Bazaar (which will be available in Hindi as well) and Bhalobashar Sohor – Season 2 on 11 November 2019. Meanwhile, the Telugu web series Hawala is slated to release on 21 November 2019.

Stay tuned for all this more and more on ZEE5. Watch The Verdict: State vs Nanavati, now streaming on ZEE5.

Parchhayee: Ghost Stories By Ruskin Bond And Other Horror Shows We Dare You To Watch Alone